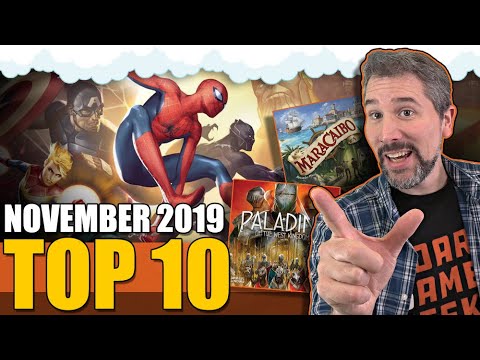 Counting down the hottest, most popular board games each month to help you find the best new games that people are playing, backing on Kickstarter, and talking about!

November 2019’s list of the top 10 best board games is designed to help you find the best new board games that you may not have known about!

How does our list compare to yours? Which games are on YOUR top 10 list of the best games for September 2019? Let us know in the comments!

Games discussed this month include:

MARVEL CHAMPIONS: THE CARD GAME
Marvel Champions: The Card Game invites players embody iconic heroes from the Marvel Universe as they battle to stop infamous villains from enacting their devious schemes. As a Living Card Game, Marvel Champions will be supported with regular releases of new cards, including new heroes and scenarios – allowing players to jump into the Marvel Universe, with Iron Man and Black Panther teaming up to stop Rhino from rampaging through the streets of New York, or Captain Marvel and Spider-Man battling Ultron as he threatens global annihilation. Do you have what it takes to join the ranks of these legendary heroes and become a champion?

PALADINS OF THE WEST KINGDOM
Players must gather workers from the city to defend against enemies, build fortifications and spread faith throughout the land. Fortunately you are not alone. In his great wisdom, the King has sent his finest knights to help aid in your efforts. So ready the horses and sharpen the swords. The Paladins are approaching. Each round, players will enlist the help of a specific Paladin and gather workers to carry out tasks. As the game progresses, players will slowly increase their faith, strength and influence. Not only will these affect their final score, but they will also determine the significance of their actions. The game is concluded at the end of the seventh round.

WINGSPAN
Taking flight from spot thirteen to land at number one this month is Wingspan by Stonemaier Games. Wingspan is a competitive, medium-weight, card-driven, engine-building board game in which players are bird watchers, ornithologists, researchers and collectors – all seeking to discover and attract the best birds to their network of wildlife preserves. Demonstrating that even in the world of tabletop games, even environmental conservation is rife with competition. The game includes 170 unique cards featuring fabulous feathered illustrations, custom dice and a tailor-made Game Trayz insert, 75 egg miniatures, a birdfeeder dice tower, and other components designed with an avian touch. Wingspan will be soaring into retailers on March 8th. In the meantime, if you wet your beak, you can try out a digital version of the game that’s available right now on the Tabletopia online platform

TAPESTRY
Tapestry is a two-hour civilization game for 1-5 players designed by Jamey Stegmaier. Create the civilization with the most storied history, starting at the beginning of humankind and reaching into the future. The paths you choose will vary greatly from real-world events or people — your civilization is unique! In Tapestry, you start from nothing and advance on any of the four advancement tracks (science, technology, exploration, and military) to earn progressively better benefits. You can focus on a specific track or take a more balanced approach. You will also improve your income, build your capital city, leverage your asymmetric abilities, earn victory points, and gain tapestry cards that will tell the story of your civilization.