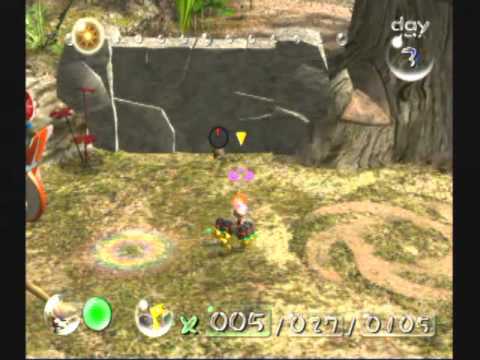 This is just a gameplay vid for Pikmin on the Gamecube.

In honor of both the release of Halo 4 and the presidential elections, I have decided to play some Pikmin…which…has…absolutely nothing to do with either event.

In my opinion, Nintendo is at their best when they are allowed to design games that are outside the box. Nothing against their main franchises, but some of my favorite Nintendo developed games are unique games like Pikmin.

Miyamoto has been quoted as saying that he got the inspiration for Pikmin while gardening in his back yard. It makes me wonder what king of ****ed up garden that guy has, but nonetheless, the end result is one of my favorite Gamecube games.

Pikmin is essentially an objective-based strategy game with minimal resource management. Yes, Nintendo fanboys, I know “Nintendo never copies,” but, essentially that’s what Pikmin is. It of course puts it’s own unique feel on the formula. The objectives revolve around finding 30 different pieces of Captain Olimar’s ship which crash lands on the planet after colliding with an asteroid. Olimar’s life-support system will only last for 30 days, so the game takes place under a time limit.

The game has a unique feel, and controls solidly, even allowing you to adjust the camera on the fly. The Pikmin, despite the large amount of them on the screen have decent A.I., and generally follow orders well. Occasionally they can act a little dumb, and find ways to kill themselves, but, overall, the controls work great.

Pikmin is a well designed, fun little game, and the biggest complain that I have against it, is the biggest weakness of the game. Due to the forced time limit of 30 in-game days, the game is very short, and has very little to keep you coming back after you’ve successfully completed it by finding all 30 parts before the 30 days is over. That being said, Pikmin is still worth experiencing if you have a Gamecube, or a Wii.

Bottom Line: If you have a GCN/Wii, and have never played Pikmin, it is definitely worth a look. It is a unique, and addictive game. If you have played it before, maybe it’s time to go back and give it another play. Games like these remind us that despite the quirky look or feel of a game, solid design speaks for a game when image fails.