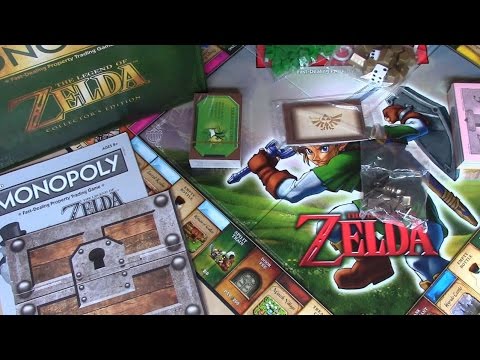 In 2014, USAopoly, makers of variants of the popular Monopoly board game by Parker Bros., released the Legend of Zelda Collector’s Edition Monopoly.

In this video, I unbox the Game Stop exclusive edition of the game that I purchased online.

The Legend of Zelda Collector’s Edition Monopoly benefits from a complete graphical overhaul of the game board, paper money, community chest (treasure chest) cards, chance (bottle) cards, and title deeds. The game tokens have also been re-designed to match popular Legend of Zelda weapons such as the Hylian shield and hookshot.

The Game Stop exclusive edition adds an additional player token (ocarina), a lithograph map which is sealed in a treasure chest envelope, and six power cards that represent instruments from various Legend of Zelda games which allow players to perform a one-time special move during the game.

At $34.99, I think that the unique features of this set warrant the purchase. It’s a must for any Legend of Zelda fan who also enjoys a good game of Monopoly.