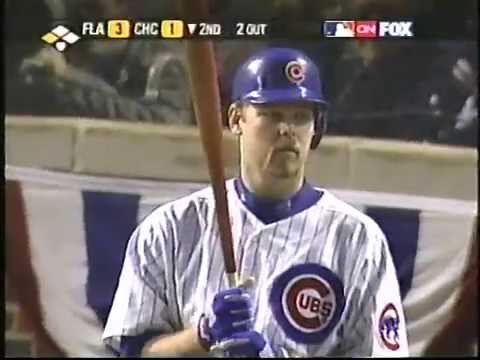 It might be one of the greatest home runs in Cubs history. It’s just a shame it meant nothing in the end. But at the time, Kerry Wood’s game-tying, two-run homer off Mark Redman in the second inning meant everything. Wood had put the Cubs in a 3-0 hole after one inning. Then, with two outs, a run in and a man on in the second, Wood worked the count full before blasting a pitch into the left-field bleachers. Moises Alou homered in the third to give the Cubs a 5-3 lead they eventually blew. But Wood’s homer was special. Thom Brennaman said it was the first homer by a pitcher in an LCS since the Cubs’ Rick Sutcliffe in 1984. Plus, it woke up the crowd (listen to the reaction on multiple replays) and put the Cubs back in the game. I’ll post the game in its entirety. Here’s the box score from Baseball Reference: