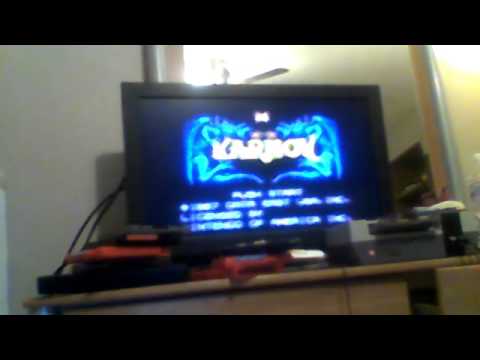 Hello and welcome to my first video! In this video, I will be showing you my made up Game Genie codes for Karnov (yes, I did make them up by the way).

SPIKES – (0:31 – 1:48) This code makes Karnov’s shots kill most enemies and bosses in 1 hit. (Later bosses, such as the Stage 7/8 boss and the final boss, require maybe TWO to THREE hits at most with this code on).

UNISON – (1:48 – 2:35) This code makes the game crash after Karnov’s first death. (Basically, you have 1 life to beat Karnov, or the game crashes with UNISON if you die).

PITSTP – (3:09 – 3:29) This code makes the title screen be immediately skipped (before and after resetting the game).

PIZZAS – (5:18 – 7:27) This code makes Karnov’s ladder “strip” the background off (like stripping wallpaper off). Note this code CAN make the game crash, even though it isn’t shown in this video.

SIGNAS – (8:29 – 10:22) This code CAN make Karnov either fly permanently (as if he has wings) or make him swim in mid-air (as if he was in Stage 5), or, rarely, do nothing. Note that if you try to complete the stage with SIGNAS and while Karnov’s swimming (in mid-air), the stage cannot be beaten (when you beat the boss, Karnov doesn’t turn into a bolt of lightning like he normally does). However, the stage CAN be beaten if Karnov’s flying and you beat the boss. (You still have to be careful, though, because when a boss shows up, the scrolling is locked in place and if you fly too high with Karnov, he will die). (Also, it seems random whether Karnov swims or flies). One more thing: if Karnov climbs a ladder, whether he’s swimming or flying, it will cancel the effect(s) out.