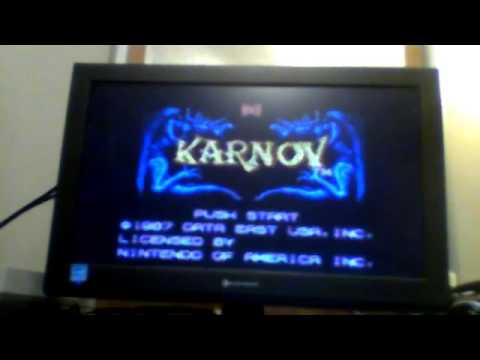 Hello and welcome to my re-done/revised video. I hope you enjoy this (even though the quality’s kinda bad).

PAINTS (0:14 – 0:45) This game genie code crashes the game whenever you attempt to jump and fall.

KOALAS (1:02 – 2:02) The rock-thrpwing enemies’s rocks travel at an upward, diagonally (45-degree) angle. The green goblins also go at kind of an upward diagonal angle too.

SPIKES (4:57 – 6:33) Karnov’s regular shots kills most enemies and bosses in 1 hit. (Exceptions are the red and green dragons and the stage 7/8 boss and the final boss).

SIGNAS (6:47 – 9:18) This is a good game genie code to experiment with. With the game genie code SIGNAS, Karnov can fly or swim (in mid-air) when he lands on the bottom floor (although it’s seemingly random as to whether Karnov swims or flies with SIGNAS). Be careful, though, because if you attempt to beat the level 1 boss while Karnov’s swimming, you’ll get stuck. (Karnov doesn’t turn into a bolt of lightning if he’s swimming and you’ve beaten the boss). You CAN clear level 1 if Karnov’s flying, but you still have to be careful, because if Karnov’s flying and he’s too high in some stages, he will drop and die. (If Karnov’s too high in some stages, the game creates a bottomless pit after you’re beaten the boss).